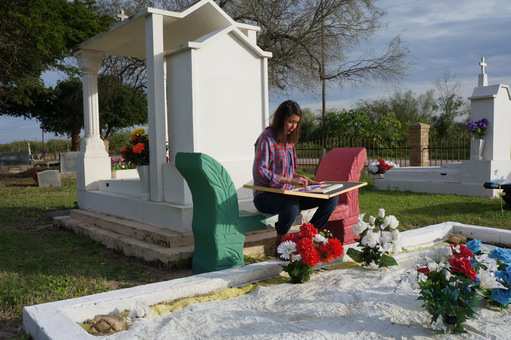 My artwork conveys the post-diaspora condition within the Mexican-Texan border culture.  With my drawings and paintings of mortuary landscapes, longing and belonging, displacement and emplacement of “in-betweeness” are resolved.

The man-made physical relationships I see and feel become an encapsulation of light patterns.  I observe the incessant formation of mortuary structures, containing an amalgamation of Indigenous rituals, the Spaniard postcolonial religion, and the practices of the American burial system, which change weekly, monthly or yearly by the addition of new objects and the growth and modification of natural forms.  The continuous changes of structures, placement of objects and the effect climate conditions bring to the place produces dynamic forms that has helped me resolve spatial problems within my composition and is perceived in my layering process.

Most importantly, I approach the space with visceral marks that reflect the thought process of the people that create these cemeteries—their creation is spontaneous and how they solve the problem of representing someone with little resources becomes aesthetically pleasing.  In each tomb, there is a need to symbolize immortality, but the ill constructed tombs, appropriation of religious and commercial products evoke an antiseptic reality.  Each symbol has been altered subconsciously reflecting a stationary presence.  Octavio Paz, Mexican essayist who identified the modern Mexican, talked about a sterile death that embodies a gesticulation of life—a representation of an endured life rather than a birth to an afterlife.  In my work, I select each space that accepts reality or questions the cultural Mexican or American dogma which defies religion, patriarchal ideologies and consumerism.  It is freedom to play with the things one could not control which are now tangible.  The saintly images become abstracted and feminine all placed within a structure that does not comply with the typical catalog bought surface.

In my sculptures, I wanted to focus on the materials being used in the mortuary landscapes and gather an understanding of the items I was depicting in my two dimensional work.  By working with cement, bricks, blocks and found objects, I was able to perceive weight, smell and texture at a greater depth than in my paintings.  The process of removing, destroying, modifying, creating and laying down objects in my sculptures made me understand why the space changes from month to month since the border people are trying to figure out how to better the place and in its course change the composition.

Outside this space, the otherness condition exists, but the germination of the mortuary landscape provides a reconciliation towards the border experience—one where there is no prosecution for living a displaced life and symbolizing it through the motif of transculturation.